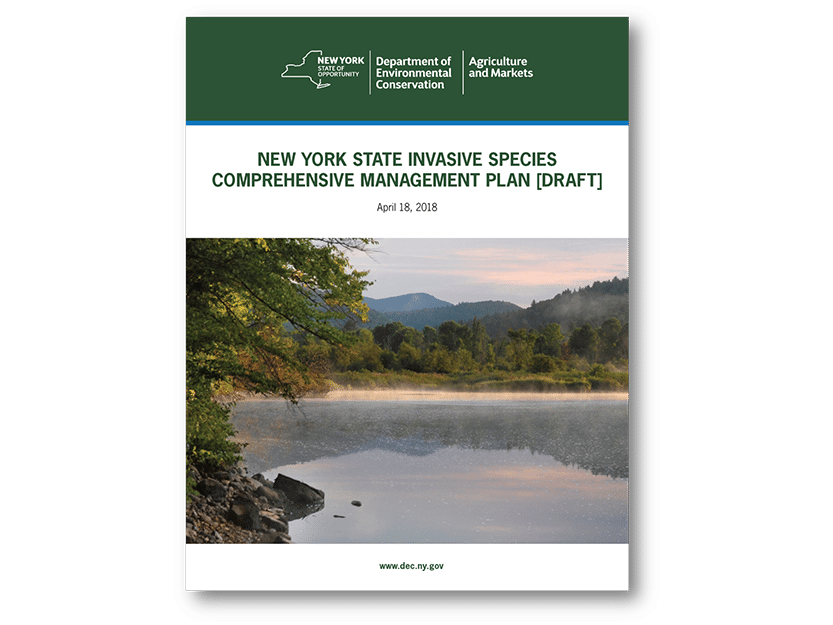 The New York State Departments of Environmental Conservation (DEC) and Agriculture and Markets (DAM) have announced the release of the State’s draft Invasive Species Comprehensive Management Plan for public comment. EcoLogic teamed with OBG to develop the plan, which is designed to minimize the introduction, establishment, and spread of invasive species throughout New York.

“At Governor Cuomo’s direction, New York is leading one of the nation’s most comprehensive programs to address the threat of destructive invasive species,” DEC Commissioner Basil Seggos said. “This proposed plan will help our state and local partners more effectively prevent, detect, and respond to invasive species.”

“The Invasive Species Comprehensive Management Plan is critical to guiding the State’s future work to combat invasive species,” said State Agriculture Commissioner Richard A. Ball. “The plan identifies key new processes and strategies to mitigate the spread of invasive species and highlights the great work that New York State has already accomplished by incorporating the existing programs and methods that have been successful. We look forward to the public’s feedback on the plan.”

Invasive species are non-native organisms that can cause harm to the environment, human health, and the economy. The draft plan identifies eight objectives to limit the negative impacts of invasive species:

The draft plan may be downloaded from the DEC website: http://www.dec.ny.gov/animals/265.html. Comments will be accepted through June 1, 2018. Comments may be sent to isinfo@dec.ny.gov or via mail to NYS DEC, Division of Lands and Forests, Invasive Species Coordination Section, 625 Broadway, Floor 5, Albany, NY 12233-4253.